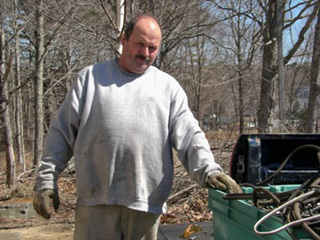 When we acquired the schoolhouse there were 4 electrical entry panels - 3 obsolete and inactive, one active. Wires, both standard size and heavy duty, looped over and under the windows, draped along the walls, were buried within the walls and ceilings through unattractive holes, ran up and down through holes in the floor to a cellar panel, and snaked back and forth along the floor joists. The active meter box was unattractively visible on the front of the building with its line cable running down the front trim board and its cable to the entry panel looping under the window and drilled into the clapboards next to the front porch. We guessed that the school was probably first electrified in the 1920's. Then Masters Machine later needed much electricity to run its machinery, though it's unclear why there were so many systems.

We were fortunate to have Dana Burnham as our scrapper. For the privilege of buying all our wiring for its copper he agreed to work with us in its removal, and additionally would truck off the tons of scrap metal, metal trash, galvanized panels, oil furnace and heating ducts, broken machinery etc left in the schoolhouse, and the truck loads of rusted cans, wires, oil drums, car parts etc discarded in the yard and tossed down the hill. Hours and days went into this joint effort. Everything was carefully gone over as to whether it might be part of the schoolhouse, or of museum interest, or could be sold in our rummage sales. 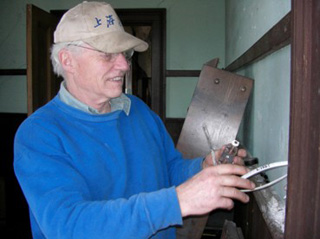 Other stuff was dismantled or sledge hammered to get it out the door and into the truck.There was so much wiring pulled out that we earned $700 from him for its copper content, plus some brass and a bit of saleable aluminum and lead. Additionally, he traded some wiring for the trucking away of 50 large truck tires which had been carried up and thrown into the upper classroom for some reason - a $750 value in dumping fees. 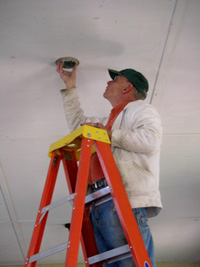 Willem Jansen and Bill Morton designed and executed an elegantly simple new electric system. The original ceilings of both floors had long ago crumbled and been covered with beaver board panels, by this time falling down, water rotted, and disintegrating in spots. Pulling these down gave us easy access for ceiling wiring, to be later covered by strapping and sheet-rock. The building is balloon construction with essentially open space in the walls in which to pull wires. The only block was at the chair rail level. The lighting and the outlet wiring are now on separate circuits, one for each floor, for a total of four circuits (and breakers). The master wires to the upper floor were pulled up behind the wall above the entry panel, through the floor plates and chair rail blocks and into the attic. From there they pass through holes drilled in the floor joists and drop down as needed for the classroom and cloakroom ceiling lights, the wall outlets.